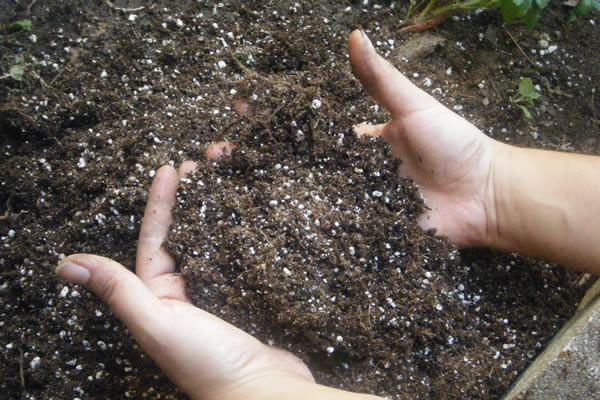 “Studying wine taught me that there was a very big difference between soil and dirt: dirt is to soil what zombies are to humans. Soil is full of life, while dirt is devoid of it.” —Olivier Magny: Into Wine: An Invitation to Pleasure

There is probably more opinion/voodoo concerning soil than about anything else in bonsai, and that’s saying something! Nearly every devotee of little trees has a formula which that person asserts is the only mixture that can successfully grow a bonsai; basically, that “My dirt is soil, and your soil is dirt.” I want to give you a little history of the thinking and practice of bonsai mixes, and summarize my most recent experiences.

The original mix used in the US before and after WWII was; 1/3 sandy loam, 1/3 decomposed granite, and 1/3 humus, usually in the form of rotted fir bark which was then available in bags called forest humus. For the Komai Bonsai Nursery, we got the loam from Khan’s cousin who shared the nursery grounds with a small indoor plant wholesale business. Hiro made his soil from some excellent topsoil mixed with various humus components, and a good shot of sand. The granite was obtained by your Humble Narrator, who would take the ancient yellow truck and an assortment of little dogs up into Santa Anita canyon above Arcadia, CA, and scrape the beautiful stuff off the road cuts into trash cans, which then had to be screened of dust at the nursery. We had three big cans of ingredients in the workshop, and we’d mix by upping the granite for conifers, or upping the humus for deciduous, plus the “house mix” of 1/3 ea. for our classes.

I also would take a load of the glorious granite down to John Naka’a house periodically. He used the same basic mix, but substituted oak leaf mold for humus. In the early 70’s, a group of Japanese heavyweights came to LA to demonstrate, took a look at Khan’s soil mix, and rejected it out of hand. To Khan’s astonishment—and testing his cultural need to be a gracious host—the demonstrators went into our large pot room, took about 20 cheaper pots off the shelf, and began breaking them up into small pieces, which became their soil mix with no additions! This was our first exposure to akadama, and it aged Khan about 10 years in an afternoon.

The writing was on the wall. Khan found a source of horticultural pumice in bags that we began experimenting with, since we couldn’t dig decomposed granite fast enough to keep up with demand. When Harry Hirao came up to teach his monthly class, he took one look at the pumice, and bought a few bags, into which he began transplanting his collected California junipers. His success rate improved dramatically, and the era of non-organic soil mixes had begun in earnest. The only thing Khan ever sold in quantities sufficient to justify his hopes for the nursery as a “business” was hundreds of bags of pumice. Though we kept a supply of house mix soil for the beginners’ classes, the more advanced people quickly went to pumice at 100%, or nearly so.

When I came to Socorro, I kept the same loose mix I used in Capitan (elev. 6,500 feet), and immediately started having trouble. I jerked stuff out of the gravel and went, in many cases, out of laziness and not having any “grit” that I liked, to 100% Miracle Grow potting soil, and things improved. In fact, my congenital laziness seemed to be working well.

My current opinion that this eternal fussing over soil mix is yet another fetish, and that other factors are more significant than we imagine. My current practice is to have a series of bags lined-up as follows:

I use my Dr. Fox coffee-can scoop, and add stuff as I feel right about it. I also keep a bag of pea gravel for a thin layer over the screen when repotting, mainly out of old habit.

This grit business has led us down many strange paths, and everything from Grape Nuts to kidney stones has been tried. I still love decomposed granite, and we can collect it here, but pumice has a bit of moisture retaining porosity that works best for us. It looks a little bird-poop white on newly potted trees. Several things have NOT worked for me. I’ve come to detest any kind of cat litter or grease sweep, though I see it recommended by bonsai people. Many of you have gone to buying Japanese dirt in the form of akadama, and I would recommend the high-fired variety. The unfired stuff breaks down too fast for my taste. I don’t like Turface anymore, some of the Oregon Mafia have railed against it as too moisture-holding, but we’re a long ways from Oregon, Toto. I just don’t care for it. I’m settled now on pumice, it’s the best thing we’ve got, I believe, and it’s readily available.

Now, what about this dirt vs. soil issue? I think we have not given anywhere NEAR enough consideration to the fact that our mix must become a happy little land, chemically and organically. As you know, when I first heard our boy Mike Melendrez in Las Lunas talk about this, I wanted to have his baby immediately. In retrospect, I may have gone overboard on my worship, like a little girl who gets hung-up on horses. But, it confirmed some ideas which I was not educated enough to articulate. And, many of us have been using his Soil Secrets black goo-goo, and we think we’re seeing good things happening. Fortunately, we have some members who are expert on these matters, and we need to force them to tell us all they know, using violence if necessary. Our soil needs to be seen as a living organism, too, using its constituent physical structure to nurture life, and to hospitably sustain it. Think about this, and we’ll discuss it more in the coming months.