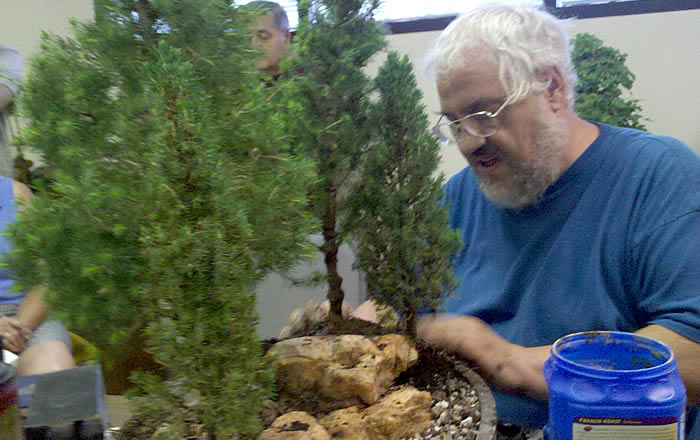 “I first became aware of bonsai when I saw a display at the Pasadena Art Museum when I was a kid taking art classes there,” explains John Egert. That accidental exposure to bonsai turned into a lifelong avocation and he shares his knowledge every month for ABC members.

On the third Saturday of most months, John gathers a group of bonsai enthusiasts at a local venue and works through a example (or two or three).  The location varies, so club members eagerly await the monthly announcement of the topic and the place.

John began by teaching himself about the trees and visiting the California Bonsai Society’s shows at the California Museum of Science and Industry. “I tried different plants, but couldn’t get the look I wanted until I began making artificial trees from clay, wire, and some woodcarvings.” He continued to work with the trees while in high school and college.

“I became obsessed with this goofy art,” John continues. In the 1960s there were few bonsai nurseries in the Los Angeles area, notably San Gabriel, Yamaguchi, Shig Nagatoshi’s, and the closest one to his home, Komai Bonsai Nursery in Temple City. Almost every day, while also attending graduate school, John found himself at Khan Komai’s. “I pestered poor Khan mercilessly, finally pleading with him to give me a job, which, with great reluctance, he did.”

It was also at this time, 1972, John began to take classes from Komai. “I was living the bonsai apprentice life, and I loved it,” John exclaims. Not only was he learning from Komai, but he was exposed to all the teachers who used Khan’s classroom, like Jim Barrett, Melba Tucker, Masakuni Kawasumi, Tom Yamamoto, Yuji Yoshimura, and many others who pioneered bonsai in the United States.

He also got to know Khan’s father-in-law Frank Nagata, the dean of American bonsai teachers. “We sat for hours working on trees and listening to the LA Dodgers, with whom ‘Dad” had a passionate love/hate relationship. I called him dad and he called me Johnny, which no one else ever did,” John recalls.

“I was making peanuts, of course, but whenever I had a tree worthy of showing, a beautiful pot would magically appear anonymously, which was Dad’s way of eliminating the Japanese gift ritual,” John says. “Whenever I had the dough, I would get him a bottle of Sho Chiku Bia Sake, which I would give him anonymously.”

The relationship between John and Khan continued until his passing. He is still in close relations with Kay Komai, his wife. “When my son was born in 1988, his middle name became Komai, on the theory that if I croaked or went crazy, he would have a place to start looking for his other family.” Kay and Khan became godparents to John’s son, and Kay “still rules his life with an iron hand.”

Another friend John made during this time is Harry Hirao, who remains a close friend. He would come twice a month to Khan’s nursery, and they would go to the Mojave to dig California Junipers. “I loved going to his house in Huntington Beach, and wandering through his collection.”

“I also got to spend a good amount of time with John Naka, and would periodically take him a load of decomposed granite from the mountains above my house in exchange for some teaching,” John says.

His apprenticeship cumulated into a year spent in Japan, working at Kyuka-en, a famous bonsai garden and nursery. John says while there, he got a “worm’s eye view of the work of Japanese bonsai and a large dose of Zen from the rituals in the nursery.”

Due to frequent moves, work demands, and other factors, there have been many times in John’s life when it has not been possible to keep bonsai and as a result John says he is always starting over, which is the part he likes best. “I probably enjoy having trees in the ground or in boxes, developing away, more than ‘finished’ trees in pots.”

“The Albuquerque Bonsai Club came as a surprise blessing,” John notes. “There is nothing better than spending a fine desert Saturday living bonsai with this gang of bizzarros and raving individualists.”