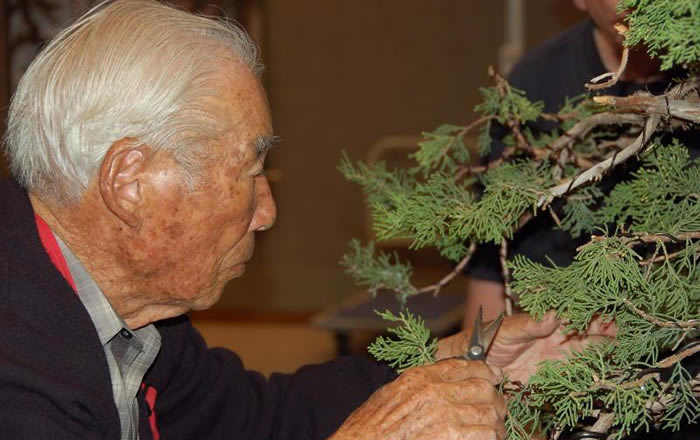 This great Bonsai Man was the living embodiment of the blessings and pleasures that our little art can bring into one’s life.

Harry was among the last living members of the group of Southern California  artists who shared bonsai, at first as their own cultural fellowship, and ultimately as teachers who, much to their surprise, became revered sensei to hundreds of students. Most of them were kibei—US born Japanese who were sent to Japan for their educations—and many of them shared the internment experience during WWII. Many of them became iconic “Japanese Gardeners” and/or nurserymen in the booming world of post-war SoCal. Virtually all of them came under the influence of John Naka, who combined his artistic talents with an obsessive desire to learn bonsai, and together they brought the standards of  American bonsai to a new level of possibility.

Harry fit all the above criteria, and really came into his own when the group began to collect California Junipers in the Mojave/High Desert. He fell in love with the desert and spent virtually every cool season weekend of his life out in the sticks looking for trees and rocks. These junipers were a real shot in the arm to US bonsai since they were at least comparable to the fabulous shimpaku junipers of Japan, and existed in the wild by the millions whereas shimpaku had been largely depleted. He soon became known as “the mountain goat,” and it was an apt title.

I met him in 1974, when my teacher, Khan Komai, thought that his advanced students should be exposed to Harry’s skills which were brought to bear on BIG junipers, especially. Khan didn’t care for large bonsai, nor much for junipers , so Harry really blew us away. I hit it off with him from the beginning, for still unknown reasons.

Like most of the kibei, Harry thought in Japanese and his English was very limited. The fact that he was not much into talking, even in Japanese, made every word precious. He never gave a lecture, or even a brief talk. He wanted to wade right in to the trees, and make the rounds at the tables. I did some commentary on his demos, and he seemed to like what I did. Several times he insisted that I narrate his work, and it caused all kinds of political troubles with clubs who didn’t want some huge interloper horning-in on their act. This led to an infamous scuffle over the microphone at a Descanso show—a strange and ugly scene.

You could define a “Master” as someone who, given the student’s lack of experience and his/her self-obsession, can point out a course of action that the student would not otherwise contemplate. By this standard, Harry was a true Master. His ability to find fronts and angles of composition was legendary. He would invariably come up with a viewing point that had never occurred to us. I once saw him take a student’s little one gallon juniper and hold it upside down while he studied it for a long moment. I was never sure what he had in mind there.

He would come up to Khan’s nursery from his home in Huntington Beach one Monday night a month, accompanied by his wife Alice, who taught school in Orange County. She was the archetypal Japanese wife, quiet and unassuming, appearing to be deferential to her husband, but who we knew ran the Harry Traveling Show with an iron hand. At first, she would sit and grade papers or knit, but later my ex, and some other wives and friends, would come along just to shoot the breeze with Alice. She was a rock.

In 1977, Harry decided to start a bonsai club in Orange County to accommodate his ever-enlarging classes. Thus was born Kofu Kai Bonsai, and it took off like a rocket. It almost immediately had a hundred members, and they were a Wild Bunch. For those of you who want to think of bonsai as quiet and sedate, you might not have wanted to mess around with Kofu Kai. That group went everywhere and did everything with a gusto that bordered on the insane. We all got nice, round, embroidered logo patches which I immediately sewed onto my old football jersey. Later, they wore bright blue Hapi coats with the patch, and would descend by the multi-busload on shows and programs all over the west. I was at John Naka’s house one day, and he was clearly upset by the amazing activity of these Kofu Kai’s who outnumbered and out-partied his smaller clubs of West LA. He kept hissing “those damn bluecoats.”

The great sacrament of Kofu Kai was beer. I never went anywhere with Harry and his Tribe that did not offer dozens of coolers well stocked with the sacramental brew. Quiet as Harry was, I can still hear him calling “John! Beer!” about every 30 seconds. He would persist in opening a can and handing it to me when I had just opened one. In 1985, I was more-or-less forced into “A well-known program of recovery” from alcoholism, and in some distorted fashion, I have Harry and Kofu Kai to thank for my new life.

I didn’t see him much when I left California, but George and I made it to his 90th Birthday in 2007—a splended bash in characteristic high style. I saw him and got some visiting time at a Baikoen show in ’08—that was the last time.

Harry Hirao lived the bonsai life at its best. He had no practical ego, yet he was a natural leader. His students would have done anything for him; and with him, nothing seemed impossible. He cared nothing about eminence. He wanted better bonsai and more fun doing it. When you were up in that desert, scouring the Eel River for stones, or sitting with him at a show, you were walking with the king. It was a hell of a feeling. If I can impart to my students even a slice of that confidence and joy that he brimmed-with, I will not have wasted my time on this planet. Get a dose of that Hirao Spirit and go out there and raise all manner of bonsai hell!